A group of wild horses galloped hard and the helicopter pursued them mercilessly. But a wild mare faces difficulties protecting her baby. “There was a small black foal who was falling behind his band, and the band was being stampeded by helicopters,” Grace Kuhn, communications director for the American Wild Horse Campaign, told The Dodo. “The foal was anything from a quarter of a mile or a half a mile behind sometimes, struggling to keep running with this big herd.” 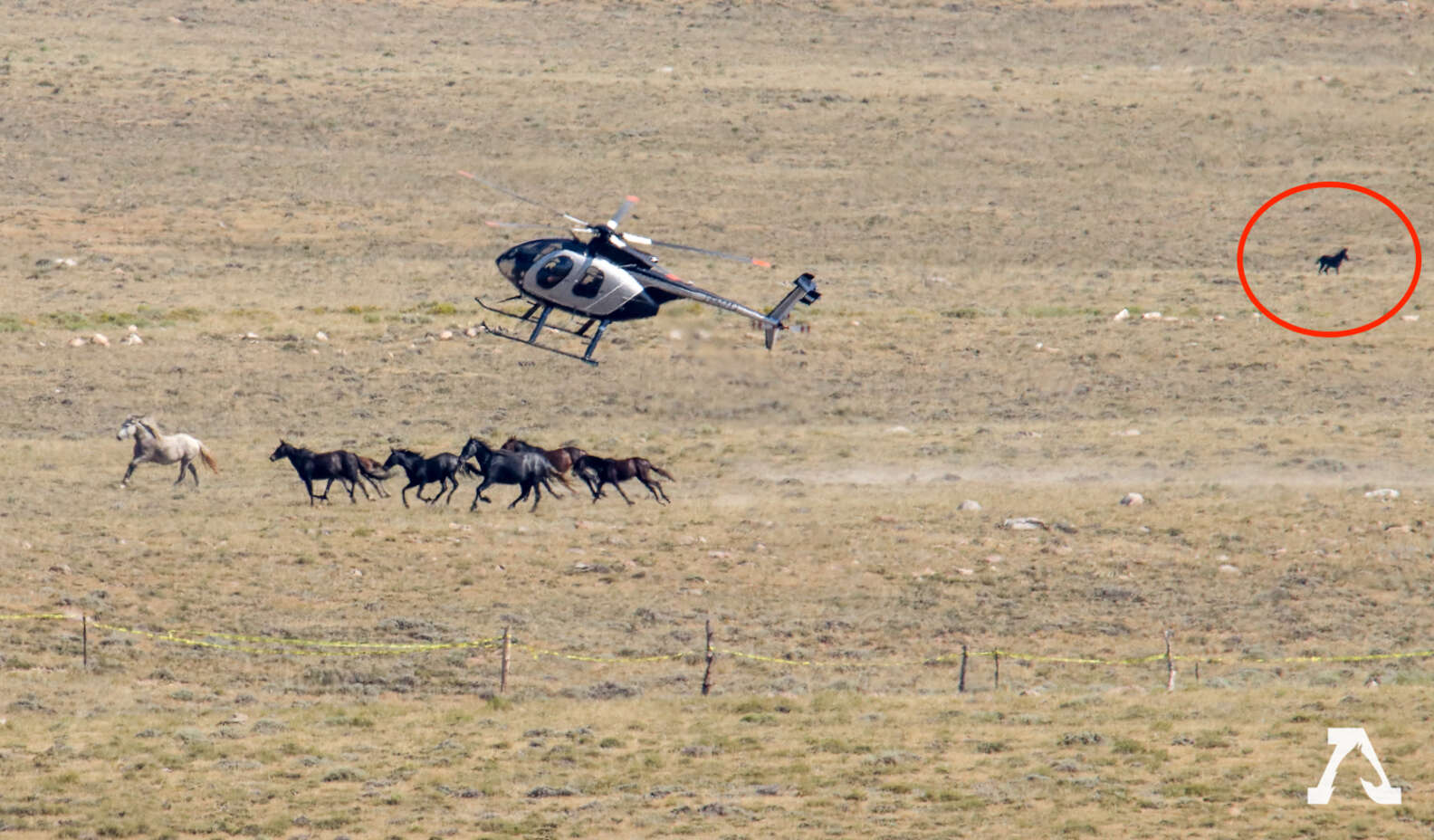 An observer from the American Wild Horse Campaign witnessed this scene in Wyoming’s red desert, which occupies roughly 700,000 acres of public land designated as wild horse habitat. However, the United States Bureau of Land Management (BLM) removes thousands of wild horses from the West in this way each year. Wild horses were chased to exhaustion in helicopters before being rounded up; some horses died due to injuries or the great pressure of cornering them. 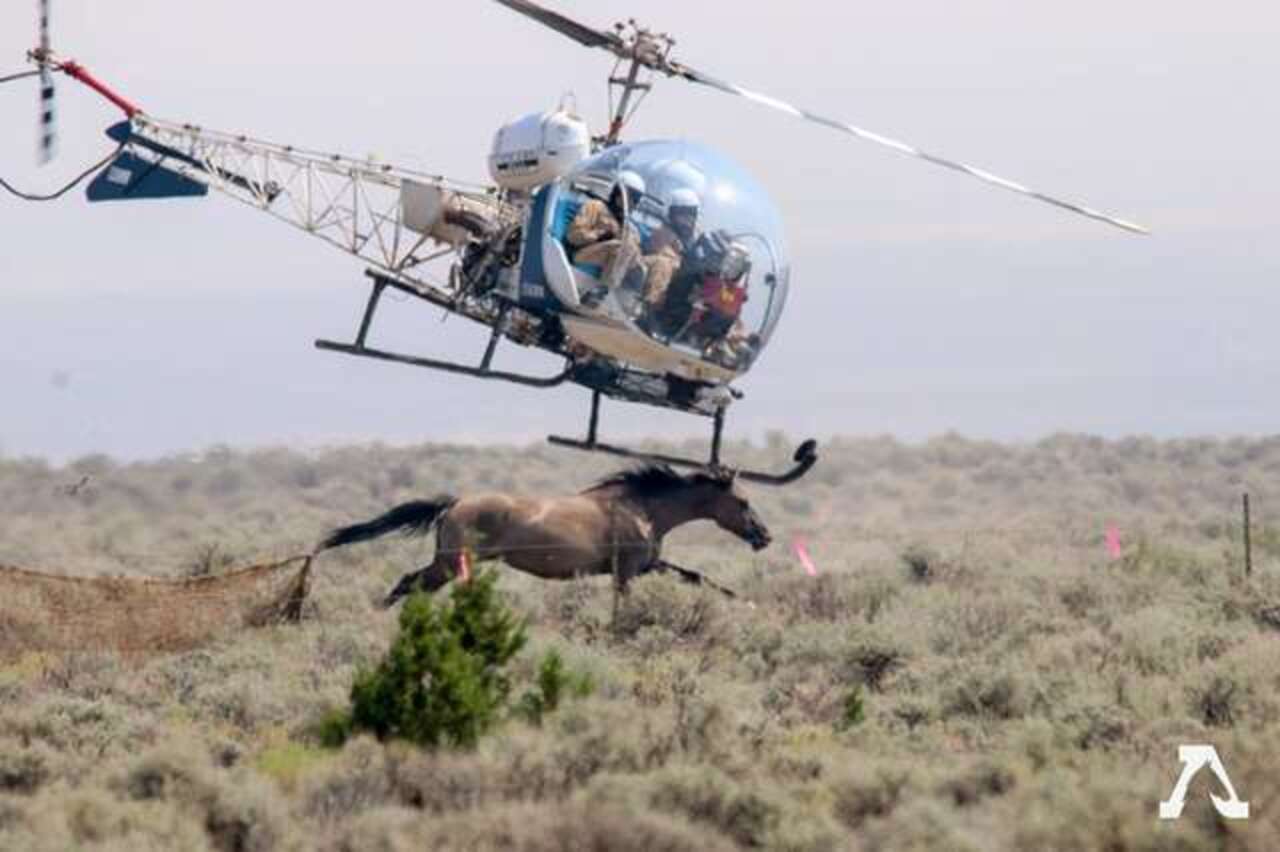 “Foals are definitely the most vulnerable out on the range when the helicopters come because they [have to] run extremely long distances, and it’s often too much for their bodies to handle,” Kuhn said. 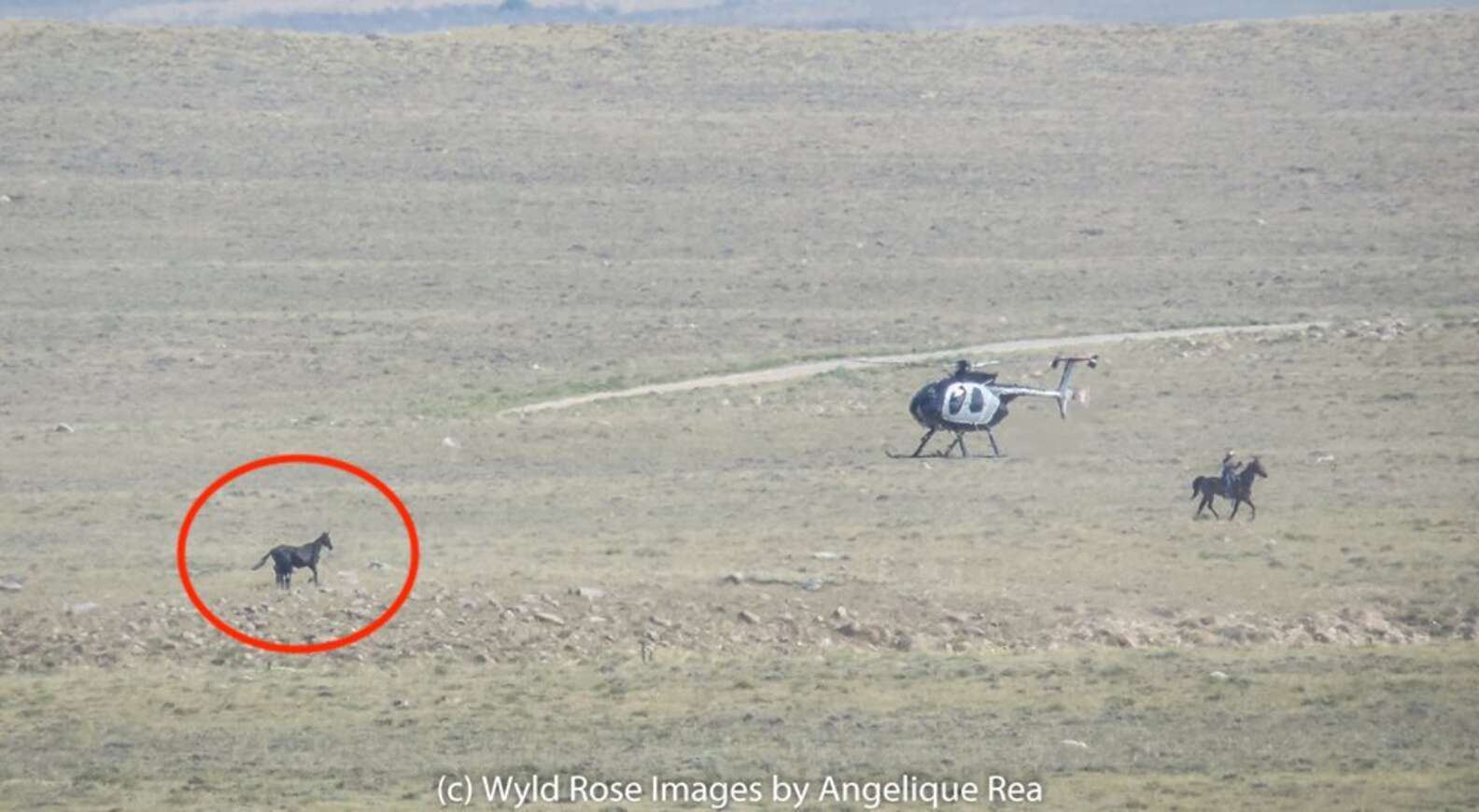 In this latest case, it was just too much for the baby horse. “At some point, his mother noticed that he wasn’t with her, so she bravely turned back away from her band and waited for the baby to catch up with her,” Kuhn added. “The helicopters moved on and pushed the herd into the traps. The mare had stayed with the foal, who had just stopped. He was completely exhausted — and he’s tiny.” 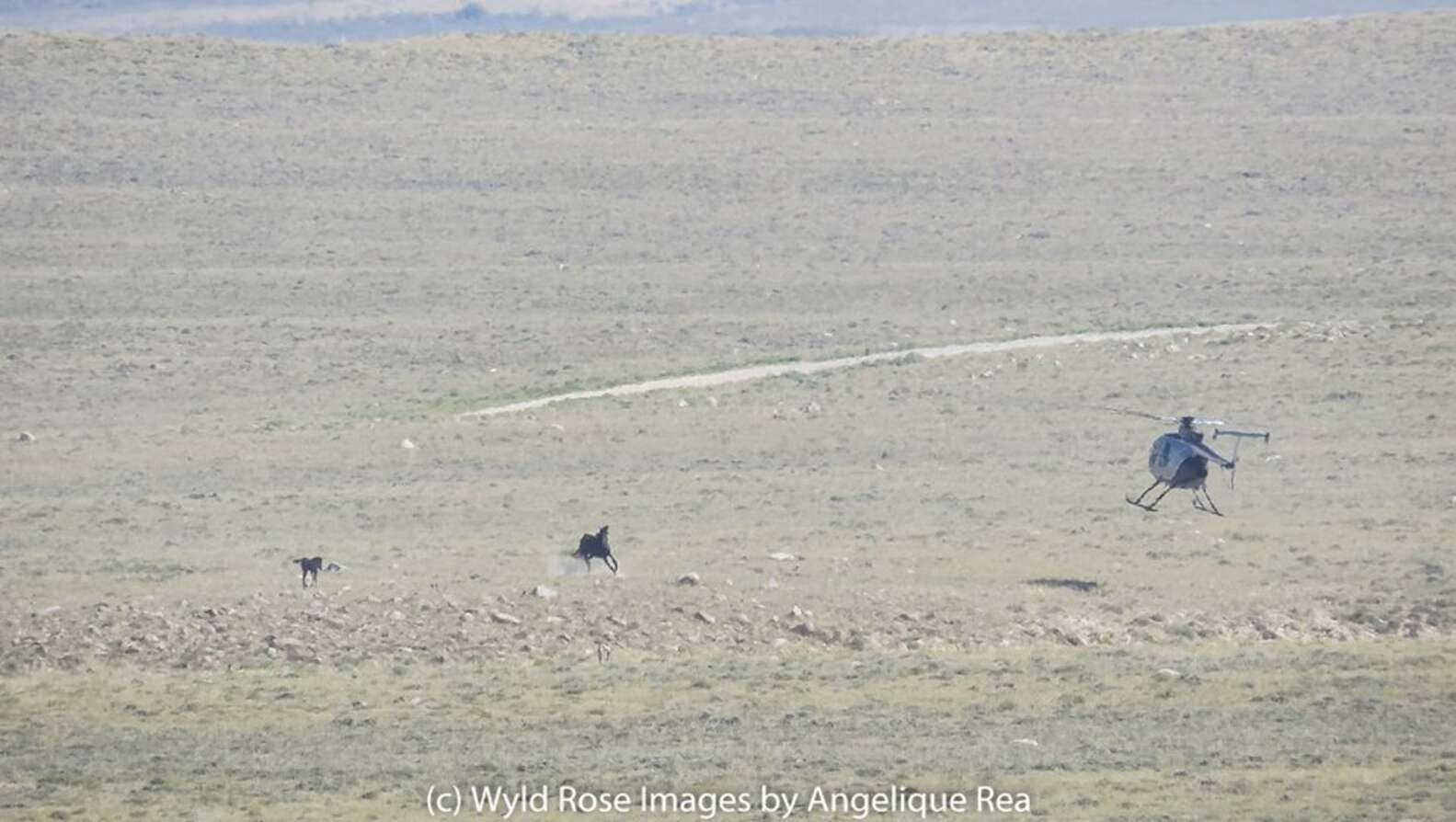 It was also extremely hot that day — about 94 degrees Fahrenheit — which made things even harder for the foal and his mom. “There are standards that the BLM has to follow — they can’t run horses over 95 degrees, and it was 94 degrees,” Kuhn said. “That’s hot for Wyoming, so that compounds the fact that you’re running these small, baby animals for miles at a time in extreme heat.” 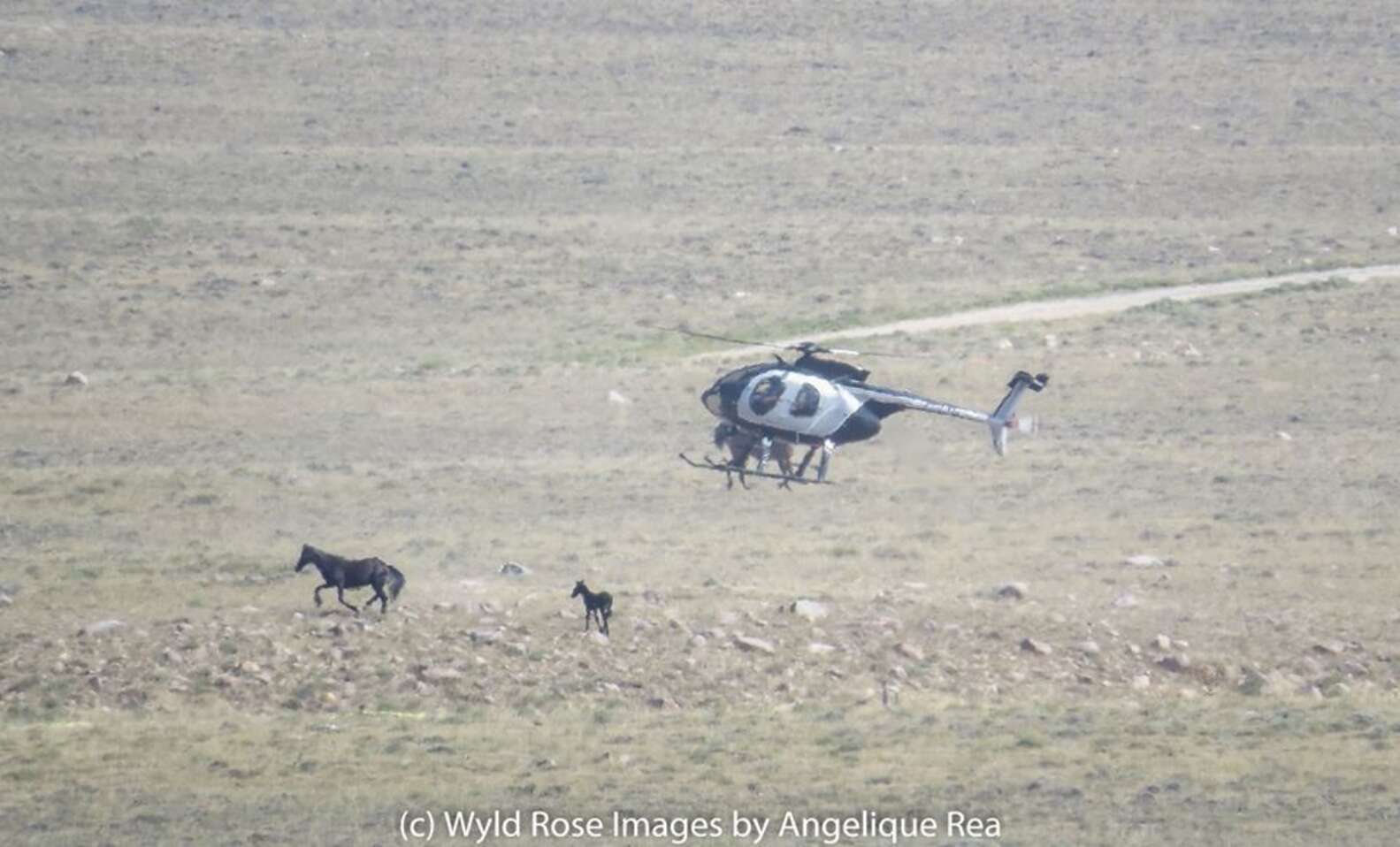 After driving the herd into a corral, the helicopter returned to the mother and baby. “Our observer watched as the helicopter came back over to the pair,” Kuhn said. “From the video, you can tell that the mother is obviously stressed. She doesn’t have her herd with her, and she’s trying to look after her baby. You can just see her trotting around, trying to decide her next move.”

When the pair refused to move for the helicopter, two wranglers on horseback arrived to try and catch them. “As a last-ditch effort to protect her baby, the mare charged one of the wranglers on horseback, and sent him away from the foal,” Kuhn said. “I have never seen that happen in all of the years I have been doing this work — a mare trying to protect her foal in that way.” 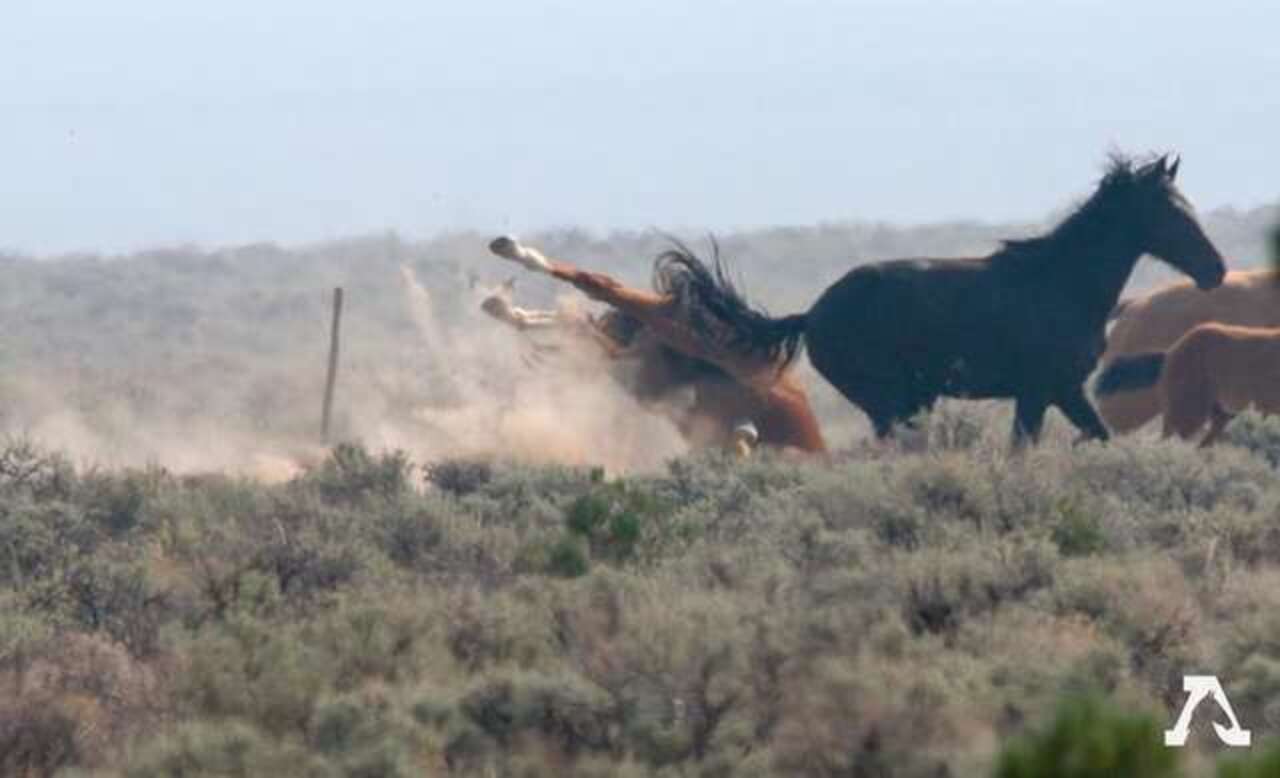 “They ended up roping the mare instead, and you can see her struggling — and then they push her into the trap,” Kuhn added. When the wranglers returned for the foal, the baby animal was too exhausted to run away, and the wranglers didn’t even need to lasso him with a rope. Instead, they simply guided him into the corral to join the rest of the herd. 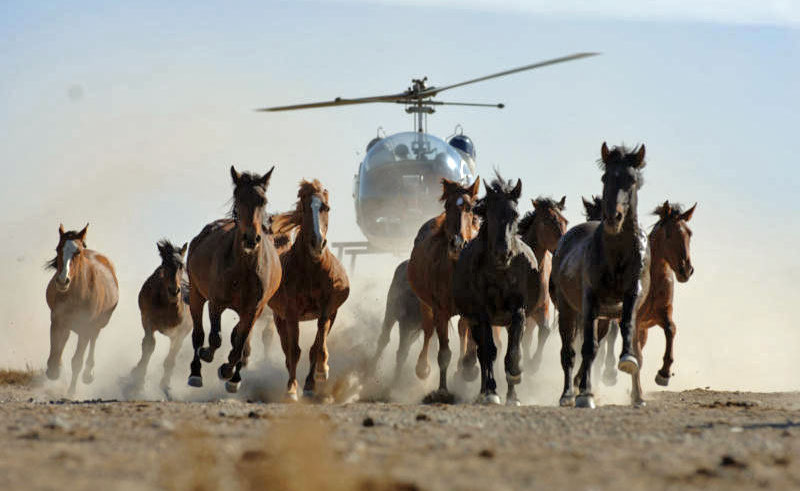 The observer went to the temporary holding area to see how the baby foal and mother were doing, but he had trouble seeing anything. “The government contractors [who run the operation] put plastic fencing all around the corrals so that you can’t see in,” Kuhn said. But when the baby foal lay on the ground, the observer got a good view of him. 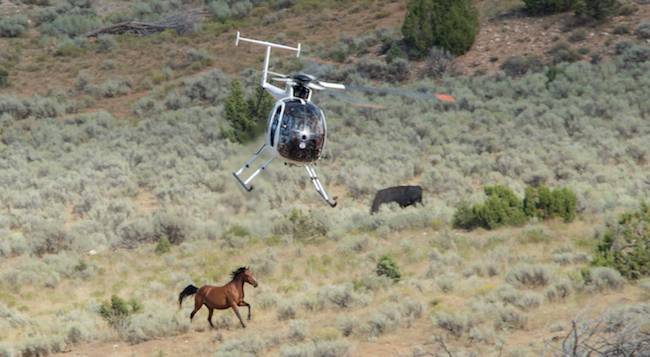 “He was completely exhausted and he looked sick,” Kuhn said. “We were told that the vet had looked him over, and he was really hot, so they just watered him down.” The next day, tragedy struck — the baby horse was found dead in his pen. The stress and physical exertion of the roundup had just been too much for his little body to handle. 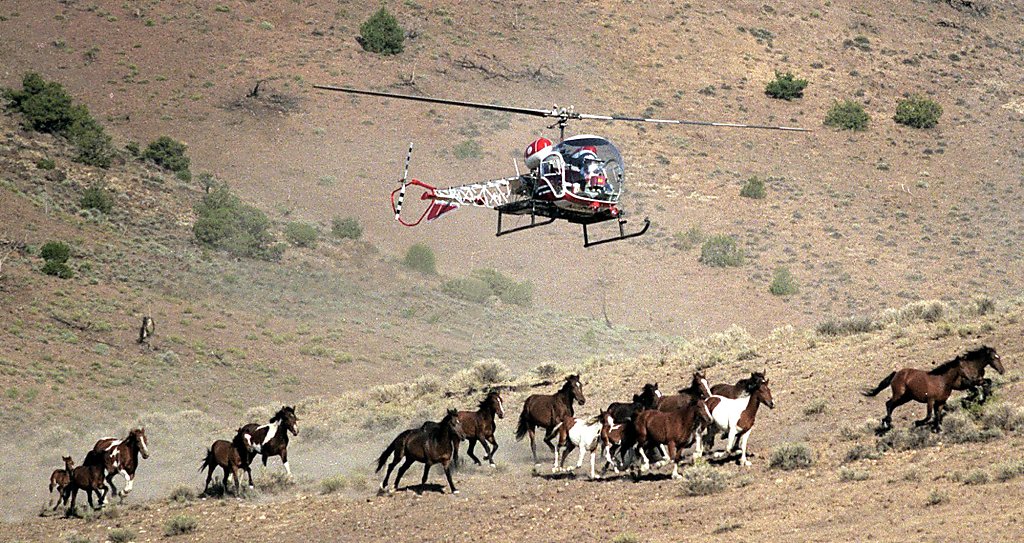 Although wild horses are protected by the federal government in the United States, BLM pointed out that horses should be eliminated because they overgraze and damage the environment. But animal welfare advocates believe that attacks are more to protect ranchers, because wild horses compete with cattle for pasture. Every year, BLM hires government contractors to capture thousands of wild horses and donkeys from 11 states in the western United States. The goal of this year’s raid is to permanently remove 9,898 wild horses from public land. But these raids are quite stressful for horses. Horses are often injured, sick or traumatized in the process. This is especially true for ponies like dead ponies, trying to keep up with their herd. 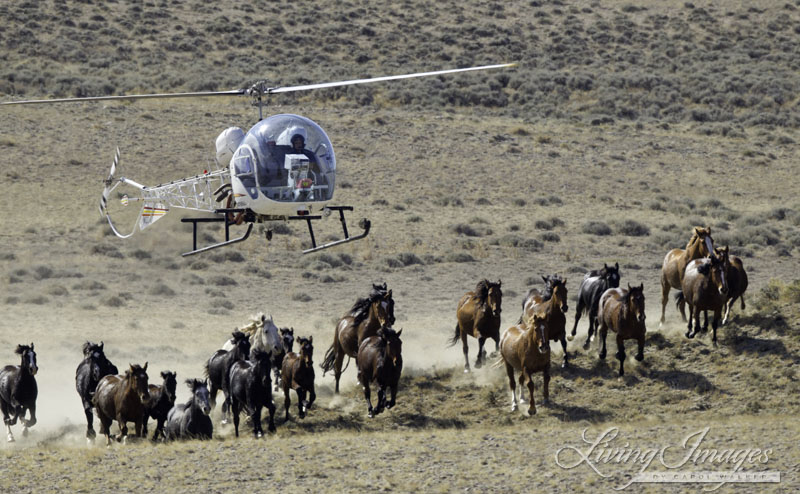 “Deaths are a common occurrence at roundups, but there are nine horses who have already died during this roundup, and five of those are foals,” Kuhn said. “Three [foals] died from capture shock, which is essentially being run to death. It happens when an animal’s stressed, or from extreme exertion. Another foal was killed after he suffered a broken leg, and then another one was killed because of a pre-existing broken foot, which they ran him for miles on.” 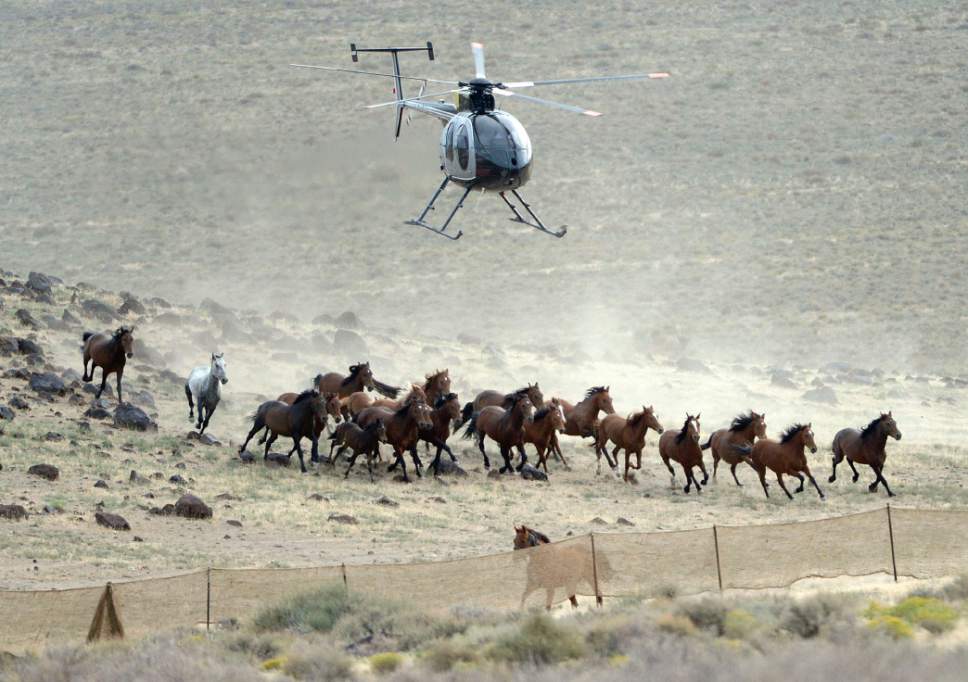 Sadly, deaths like this are not uncommon. Four horses were recently euthanized after a raid on the Bible Springs Complex and Sulfur Livestock Management Area (HMA) in southern Utah. After the helicopter pushed them directly to the barbed wire fence, others may have been injured; some horses managed to jump over the fence, but other horses hit the fence and fell heavily to the ground. 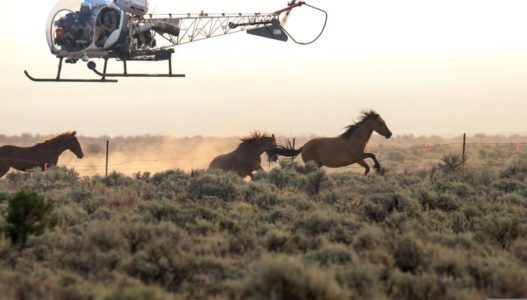 “It’s just this brutal, brutal program,” Kuhn said. “We have sent a letter to the Wyoming state director, saying, ‘What’s going on? You’re running these horses way too hard. All of these babies are dying.’ The animal welfare program says that the BLM … should only move the helicopters as fast as the slowest animal … because this happens to these young animals. Their bodies get compromised.” 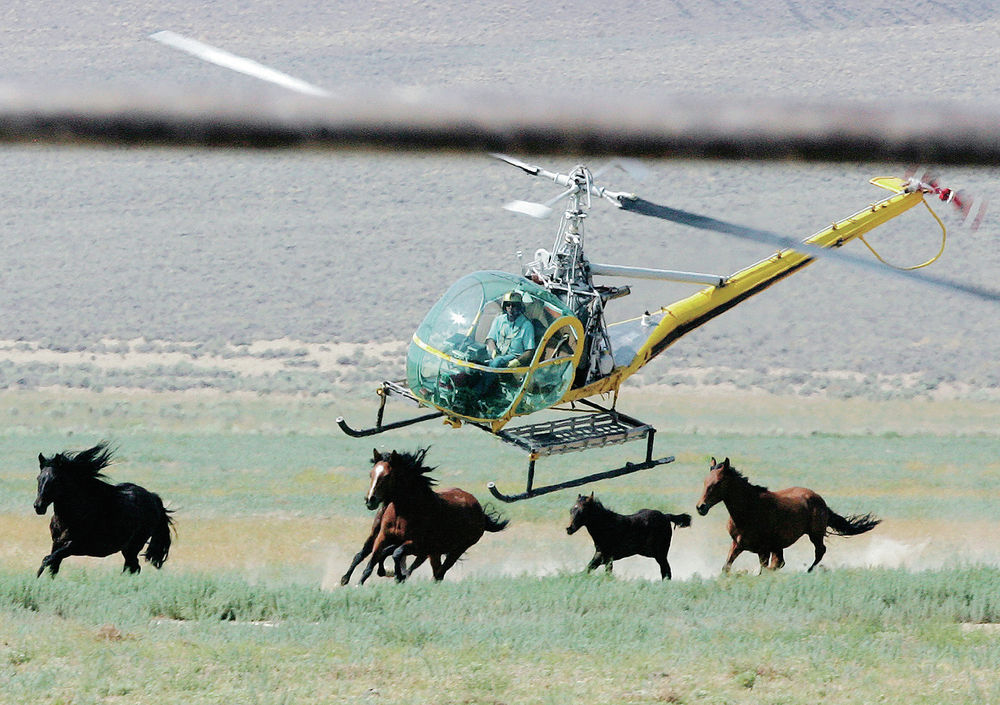 The surviving horses were transported to a crowded containment facility similar to a cattle farm. Although some horses are lucky enough to be adopted, most of the horses will remain at these facilities for many years. In the past, the government even sent surplus horses to slaughterhouses in Canada and Mexico, but the plan was recently closed. 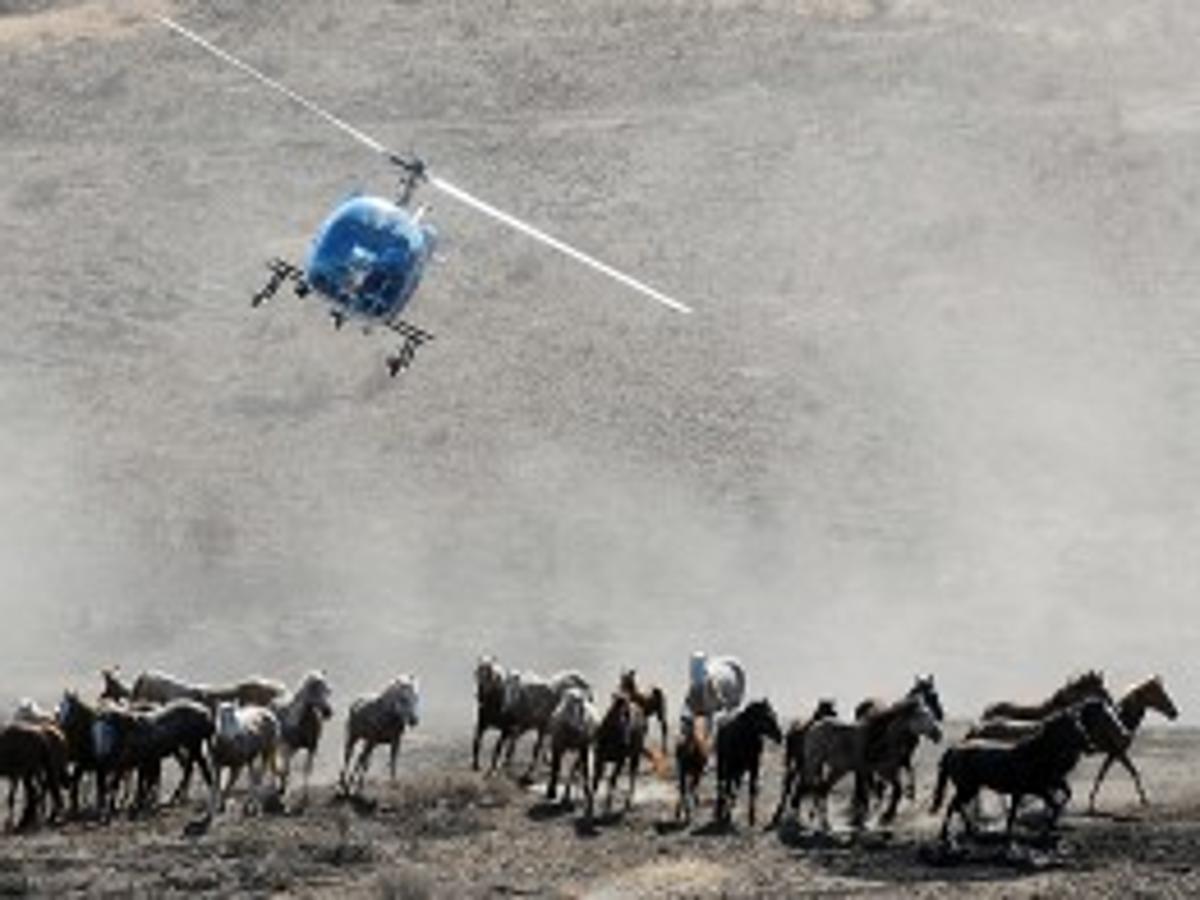 Not only are these roundups distressing for horses, they’re also distressing for the people who want to protect them, Kuhn said. Yet she believes the public has the power to change these horses’ fate for the better. 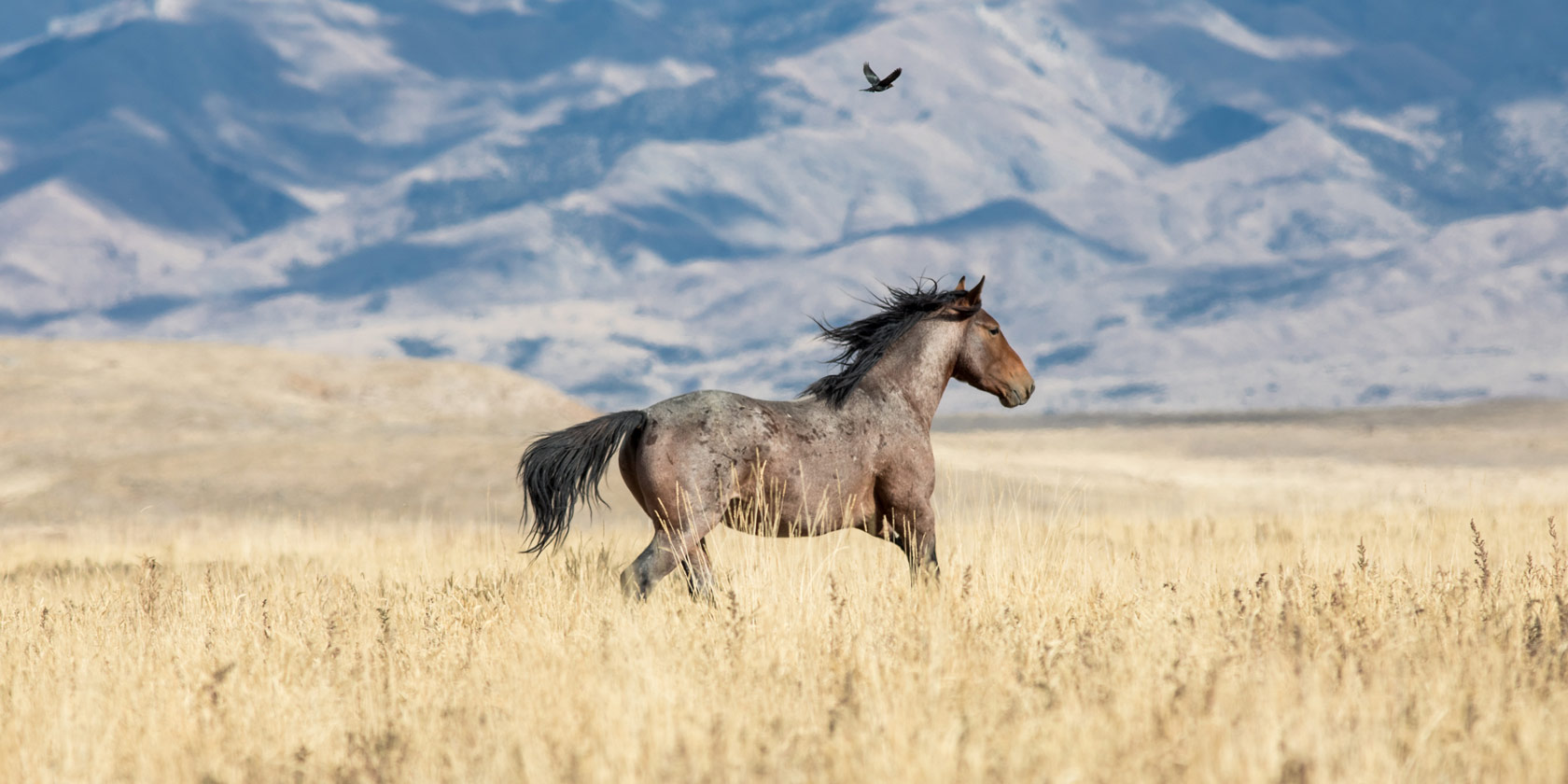 “The BLM program doesn’t have to be this way, and foals don’t have to die,” Kuhn said. “It’s extremely mismanaged, and there are solutions that the BLM could be implementing right now to keep wild horses wild and keep families together that don’t cause these unnecessary deaths.”